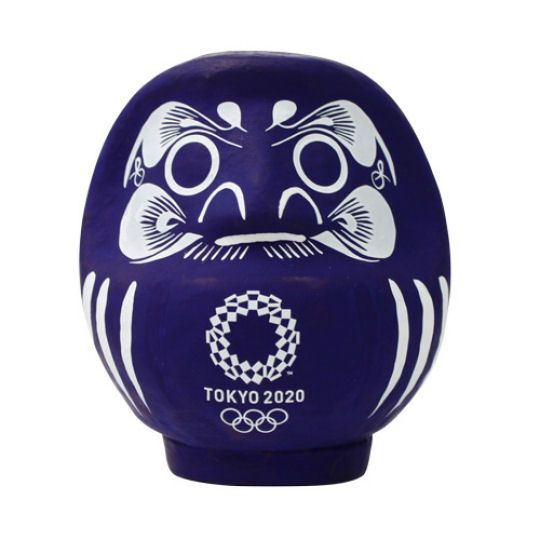 The name Daruma points to the founder of Zen, known to the West as Bodhidharma. But the truth be told, the name of the roly-poly doll that has become a symbol of endurance and the ability to bounce back from what life throws at you is associated for most Japanese not with Buddhism but with the city of Takasaki in Gunma Prefecture. This is where it is said daruma dolls started, back in the 18th century, and it is also where the Tokyo 2020 Olympics Gunma Prefecture Dark Blue Daruma Doll comes from, created by the local craftspeople working in the same traditional way.

Like all daruma dolls, the Tokyo 2020 Olympics Gunma Dark Blue Daruma Doll is made of papier mâché and clay. Unlike them, though, it isn't red but rather the dark blue that is the official color of the Tokyo 2020 Olympics Games. This daruma doll comes with the Tokyo 2020 insignia and logo and the Olympic rings painted on his body but his eyes have been left unpainted for a reason: folk tradition has it that you paint one eye when you set a goal and paint the second one when you have succeeded. Isn’t this appropriate for an Olympic Games item?

Shipping weight: 0.4Kg / 0.88lbs
Other products in this category